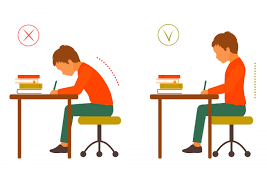 Poor posture in children is not always caused by scoliosis or functional spinal imbalance. I like to call the functional spinal imbalance as the “lazy spine’ because you will usually catch your child slouching when playing on the computer or reading. No matter how you scream or coaxed they somehow will not learn to conform to that so-called good posture. Finally, most parents just give up or should I say give in.

As a parent trying to diagnose which of the above your child has can be frustrating despite the information available online. In this article, I like to share how you can determine the key difference between scoliosis and functional spinal imbalance. There is some overlapped between the two that can cause poor posture, however, in scoliosis, you will usually see the spine curve either left or right when looking from the front or back of the child.

Unless the curve is very pronounced your untrained eye probably can’t quite tell if your child has scoliosis and it’s best you let your chiropractor determine if it were so. Scoliosis is usually harder to correct since the cause is usually idiopathic, meaning, no one really knows the cause. Also, a child can be born with scoliosis from some malformation of the vertebrae of the spine. Although the current medical treatment is either bracing in the early stages, I strongly believe bracing will do very little to help your child. In fact, I believe it will further weaken the spine since muscles do not get to be used.

Interestingly enough, exercises have been shown to have the most evidence to support their use in the treatment of scoliosis, yet there are no medical scoliosis centers or hospitals in Singapore I am aware that currently utilize these methods. We use a system of chiropractic adjustment and the Swiss Kieser System of strengthening to correct or prevent the worsening of the scoliosis spine.

Poor posture in children due to functional spinal imbalance is not congenital and is usually caused by spinal imbalance resulting from trauma, nutritional deficiencies, or toxicities. They are usually easier to correct and often correct quickly in our office. Functional spinal imbalance can also accompany learning or social disorders.  Don’t worry or get too concerned whether you know which problem your child may have. As a parent, we recommend you get your child checked as soon as possible since it is so much easier to help them when they are younger before the condition gets worse.

Poor posture in children can be a sign of more than just slouching or not sitting up straight. Poor posture can also be indicative of an underlying physical issue – functional spinal imbalance. This kind of imbalance is often caused by muscles, ligaments, and tendons in the spine that is tightened and contracted, resulting in weakened postural muscles that cannot keep our bodies upright.

Poor posture in children can be a sign of more than just being tired or lazy. It can signal an underlying problem such as functional spinal imbalance that can also accompany learning or social disorders. Children who suffer from poor posture may experience pain, fatigue, and difficulty concentrating, all of which can interfere with their academic performance.
Functional spinal imbalance occurs when the muscles on either side of the spine become tight, resulting in poor posture and alignment. This can cause additional stress to the supporting muscles and joints, leading to chronic pain and discomfort. Poor posture is also associated with a decrease in circulation due to decreased oxygen intake during breathing patterns. As a result, children who suffer from functional spinal imbalance are at risk for developing further issues concerning their physical health if not addressed properly.

Below is a testimonial report sent by a child’s mother. The child does not only has poor posture but was also diagnosed with ASD or Autism Spectrum Disorder.

His Chinese tutor also commented that he is able to pick up Chinese faster now. He used to need writing to memorize a word but now, he just needs to glance through the word 2 times and he could remember how the word is. Not too sure if this has to do with the corrected posture though.

But his neck problem has improved. Now he does not have the stiff neck problem, unlike the previous time it strikes him twice in a month.”

Poor posture in children if left unattended can lead to more serious issues. Don’t delay sending your child for a check-up with us. If you need more information, you can read the results and see the actual report of her Child Posture Correction here.