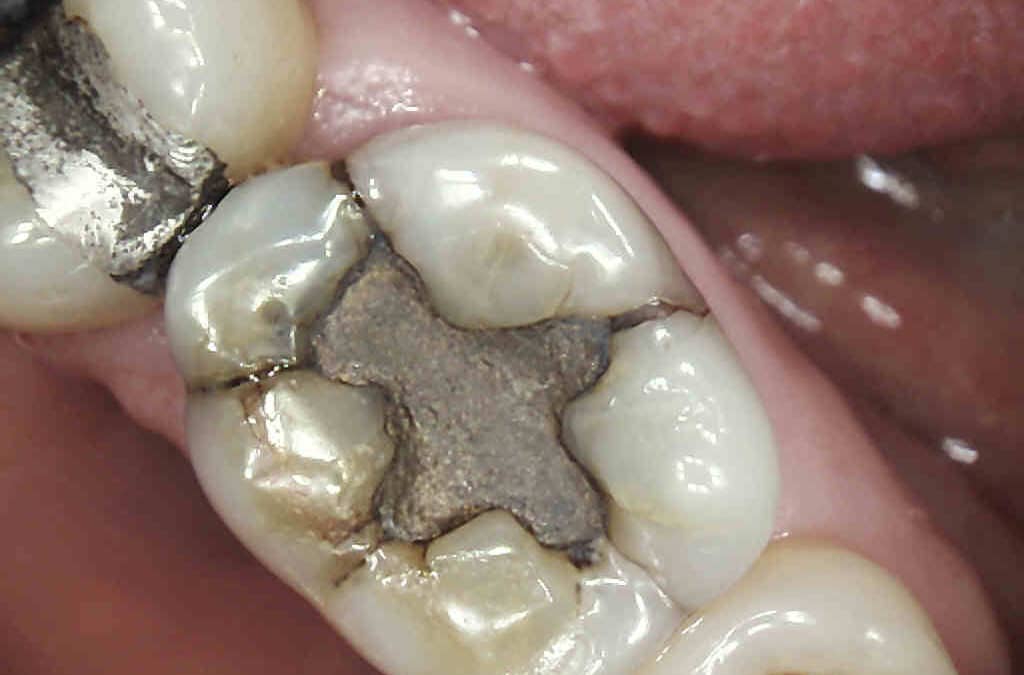 If you have a good number of dark silver color amalgam fillings in your teeth from a previous cavity, you could be suffering from chronic mercury toxicity. Symptoms may include emotional instability, inability to concentrate, mental depression, manic depression, tremors/trembling of hands, insomnia, Myasthenia Gravis, numbness and tingling, loss of memory, Multiple Sclerosis, motor neuron disease, etc. Mercury is one of the most toxic substances to the brain and the entire nervous system.  A Study by the University of Calgary showed in this video just how toxic is mercury to the nerves under the microscope. Many of us had it put in our mouths in our younger days in school or the military. It is cheaper and more durable but the question we did not know how to ask was “Is it safe?” Have you asked your dentist?

What are the pros and cons of amalgam and white composite fillings? According to Dr Glecos the advantages of amalgam fillings:

Dental amalgam is about 50% liquid mercury and 50% a combination of alloy powder (metals composed of silver, tin, copper and others). Many years ago when I asked my dentist friends (I have several) they all assured me the amalgam fillings are very stable and the mercury vapors if any were released are so miniscule it will not be toxic to my body. Well, incidentally one of them also believed chiropractic is quackery, so go figure! Should you listen to your dentists? I am definitely not the expert in this area so I will give you 3 references about amalgam leeching mercury vapors from you teeth.

Here are the references to help you answer if amalgam really release mercury vapors? Are Dental Amalgam Fillings Safe? Do your own research.

The International Academy of Oral Medicine and Toxicology has been trying to tell the public what the American Dental Association would not tell. Their mission is to promote their research for the last 30 years that they have “proven beyond a reasonable doubt that dental amalgam is a source of significant mercury exposure, and a hazard to health.” Yes they knew this for 30 years but most of us today still have no clue. This truth has been controversial and probably still is. Often times the truth is not popular. Watch IAOMT videos on their website and the classic one below on the “Smoking Teeth.”

Did you know that the vapors released from the amalgam are so toxic your dentist is required by the World Health Organization to dispose them as hazardous when removed from your mouth! According to the United States Environmental Protection Agency  or EPA on dental amalgam, they say when Toxic Mercury Fumes From Amalgam Fillings are placed in or removed from teeth, they can release a small amount of mercury vapor. Amalgam can also release small amounts of mercury vapor during chewing, and people can absorb these vapors by inhaling or ingesting them. High levels of mercury vapor exposure are associated with adverse effects in the brain and the kidneys.

Dr Oz during his show in March 2013 aired a segment on Toxic Teeth. The folks at the American Dental Association are not happy with Dr Oz for  exposing the truth about leaching mercury from your amalgam fillings. It caused quite a stir and the ADA issued a statement to refute the segment. Watch Dr Oz 3 part video series and see what you think.

So what are you going to do about this information depends on whether you have mercury fillings or not. Questions about removing or even putting in amalgam in your teeth may raise some questions in your mind:

Mercury is one of the most toxic substances to the brain and nervous system, yet it is still used in dental treatments such as amalgam fillings. Despite being a cheap and efficient option for filling cavities, amalgam fillings contain up 50% mercury which can be released from the mouth into our bodies. The ongoing ingestion of this toxin can have severe consequences on our health, including damage to vital organs such as the brain and central nervous system.
Constant exposure to mercury through amalgam fillings can cause an array of neurological issues including headaches, fatigue, irritability, poor concentration and memory impairment. More serious cases may even lead to insomnia, tremors or burning sensations on the skin. Children are particularly vulnerable to mercury poisoning due to their developing brains and bodies which makes monitoring any potential symptoms all the more important.

Mercury is one of the most toxic substances to the human brain and nervous system. It is particularly dangerous when it comes into contact with our bodies, as it can cause serious physical and mental health problems. This is why it has been banned in many consumer products, such as paint and cosmetics. However, one of the most common sources of mercury exposure is still present today: amalgam fillings.

Amalgam fillings are essentially dental fillings composed primarily of a mixture of metals, including mercury. Despite their widespread use for over 150 years, these fillings have recently come under intense scrutiny due to concerns over their potential toxicity. Studies have shown that mercury from amalgam fillings can leach into the body and accumulate in organs such as the brain, where it creates an array of neurological issues ranging from headaches and anxiety to cognitive deficits and seizures.

mercury, a naturally-occurring element found in the environment, is one of the most toxic substances to the brain and entire nervous system. It has been linked to many illnesses, including neurological diseases and mental disorders. Of particular concern for those wishing to limit their mercury exposure is its presence in dental amalgam fillings.
Dental amalgams are a type of filling used to repair cavities that contain an alloy of silver, zinc, tin, and copper with mercury as a binding agent. While these fillings have been used since 1833 they may be responsible for an increased risk of illness due to mercury accumulation in body tissues over time. Studies have shown that chronic exposure can affect normal organ functioning and cause neurological symptoms including headaches, memory loss, and depression or anxiety.

Mercury is one of the most toxic substances known to mankind. It has been linked to numerous adverse health effects, especially on the nervous system and brain. One of the major sources of mercury exposure is dental amalgam fillings, often referred to as “silver” fillings. These fillings contain up to 50% elemental mercury which can be released into the body over time.
Inhaled mercury vapors from these amalgam fillings are easily absorbed by humans and can cause serious neurological damage. Mercury toxicity can also result in inflammatory responses that may lead to autoimmune diseases such as multiple sclerosis or lupus when left unchecked.

Obvious we don’t have all the answers. If you have any thoughts or experience or recommendation do share!